The Royal Baby – The New Arrival 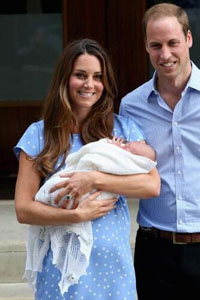 Congratulations William and Kate. At 4.24pm on the 22nd July 2013,at St Mary’s hospital in Paddington, London Kate gave birth to a baby boy weighing 8lb 60z. Both Mother and baby are doing well.

The Royal Baby – Silver Penny. The  Royal Baby boy’s arrival today, Monday 22nd July 2013 is causing excitement around the world. The latest news is that the Royal Mint will commemorate the birth of the Royal Baby with the striking of 2013 silver pennies that will be given to all those new babies who will share their birthday with new royal arrival. Parents will need to go online to register for a coin within 60 days of the birth with proof of their child’s birth with a copy of the birth certificate.

The Royal Baby – Name guessing. Around Britain, Betting shops had seen an unprecedented surge in betting activity over what the Duke and Duchess of Cambridge will name their new baby. As the time drew nearer interest increased even further despite the fact that bookmakers William Hill having already taken over £60,000 ($90,000) in bets to date.

The Royal Baby and Royal Crown Derby. To mark the birth of the new arrival, Royal Crown Derby have created a collection of £16,000( $23,000) plates to coincide with a re – launch later this month. This will be the first time that they have produce china for the Royal family since Prince Harry was born. “It is an exciting new chapter in the history of a very illustrious business.” said Kevin Oakes, Chief Executive. More on this story can be found on the BBC Website

No Royal birthdays to celebrate today