The Royal House of Stuart and the English Civil War

The Royal House of Stuart was founded by Robert II of Scotland who reigned from 1371 until his death in 1390. The first member of the Scottish house to reign over both Scotland and England however, was James VI of Scotland. He inherited the English crown and the title of King James I in 1603 when the Tudor line became extinct. His right to the throne was through his bloodline to Margaret Tudor, the daughter of Henry VII, his great grandmother.

The accession of James, created the Union of the Crowns which aligned the two states of England (including Wales and Ireland) and Scotland at least for the purposes of diplomacy and installed the Royal House of Stuart south of the border. For the first time the title King of Great Britain was introduced, though it had no basis in law until 1707 with the Act of Union.

The Royal House of Stuart – Before the Civil War. From the outset, the reign of King James did not run smoothly. He along with his successors, believed in the medieval concept of absolute power which of course did not sit well with Parliament. During his reign he was constantly at odds with Parliament over many issues particularly in the sphere of finances. James imposed new taxes on the populace to raise finances without seeking the approval of Parliament.  In response it created the Great Protestation in 1621, listing the privileges that Parliament should be entitled to. James was incensed and dissolved Parliament. This act was soon reversed but led to the downward spiral which would eventually lead the the execution of his son Charles I.

death of James I, his son Charles, succeeded him in 1625. Charles followed in the beliefs and actions of his father and further antagonised Parliament forcing it in 1628 to issue the Petition of Right, a major constitutional document. It restricted the King’s rights in many avenues, including raising revenue, imposing martial law and protecting subjects from imprisonment without cause. Charles reluctantly signed this petition to enable him to obtain funds but he attempted to circumvent it by extending existing taxes and collecting more money from his subjects. In 1629 Charles, following a major dispute with Parliament over the legality of collecting customs,dissolved Parliament for eleven years until 1640.

The desire to impose Anglican conformity on the Presbyterian Scots by the Archbishop of Canterbury – William Laud,  eventually led to the English Civil War. Charles prepared to move an army into Scotland in 1638 to create a settlement to this religious dispute with the Scots. But he was then compelled to recall Parliament after failing to crush the rebellion in Scotland. This was short lived after not getting the required support he again dissolved it, only to be forced into recalling it again a few months later in what was to be known as the notorious Long Parliament which remained until 1660.

The continued belief by Charles that he could rule England by royal prerogative and without the assent of Parliament, 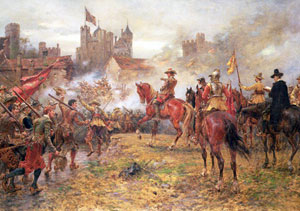 his marriage to a Roman Catholic allied with his religious policies which further antagonised the populace by imposing Anglican conformity and removing the pulpits from the Puritans , initiated the mistrust and antipathy which eventually led to the English Civil War in 1642 when Charles attempted to intimidate Parliament when he ordered the imprisonment of five individuals who held influence in the House of Commons. However they fled and Charles chose to take drastic measures against Parliament and assembled an army at Nottingham in 1642, leading to the start of the English Civil War.

The Royal House of Stuart and the Civil War. From 1642 until the defeat of  Charles and his army in 1649, fought the armies of the English and Scottish parliaments in the English Civil War. After his defeat in 1645, he surrendered to a Scottish force that eventually handed him over to the English Parliament

If you have enjoyed reading about the Royal House of Stuart Family Tree or considering copying my family tree, please share your appreciation by clicking on one or more of the social buttons above – thank you.