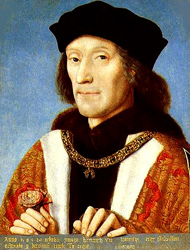 Henry Tudor, the 2nd Earl of Richmond. Henry was born on the 28th January 1487 at Pembroke Castle in Wales. His father Edmund Tudor, the 1st Earl of Richmond had died two months earlier. His mother, Margaret Beaufort was only thirteen at the time of his birth.

Henry was born into an era of conflict. The War of the Roses had been battling sporadically since 1455. A result of the dynastic wars for the throne of England. It was fought by supporters of two rival branches within the Royal House of Plantagenet. The House of York and the House of Lancaster, whose heraldic symbols were the white rose and red rose respectively. Henry belonged to the latter and his claim to the throne was tenuous.

His father was of Welsh royal lineage and this link was to prove invaluable in gaining support from the Welsh during the Battle of Bosworth. However, it was his mother’s descent through the House of Beaufort from King Edward III via his third son, John Gaunt that enabled Henry to place a legitimate claim to the throne in 1485.

Henry Tudor in protective care. Jasper Tudor took Margaret and her son in to his protective care after the birth of Henry. But after her marriage to Henry Stafford a few months later, Henry remained with Jasper and rarely saw his mother from then on. In 1471 when Henry was four, Edward IV won power for the House of York  as a result of the Battle of Tewkesbury. Many Lancastrians died or were later executed including King Henry VI who was killed in the Tower of London.  Jasper was forced to flee in disguise to his Lordship in Pembroke. However, he was pursued mercilessly by William Herbert,  although he eluded capture, eventually escaping to Scotland.

King Henry VII – The fight for the Throne.

Henry VII and Ascent to the throne of England. Edward IV rewarded William Herbert with  Jasper’s lands and also the custody of Henry. But he was treated well especially by William’s wife Anne and when he triumphed in 1485, Henry Tudor sent for her to come to London. Henry continued to live with William until 1469 when Herbert was captured fighting for the Yorkists and executed by Richard Neville, Earl of Warwick (the “Kingmaker”). He had recently switched allegiance to the Lancastrians.

Henry VI was restored to the throne by Warwick in 1470 and brought Henry to court. However, when Edward IV regained the throne, Henry fled to Brittany where he then spent most of the next fourteen years in exile. 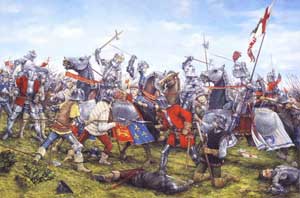 In 1483 after King Edward IV died, his brother Richard usurped the throne from his 12 year old nephew and heir Edward V to become King Richard III. Meanwhile, over in France, Henry Tudor was positioning himself as heir to his murdered uncle Henry VI.

Support for Henry continued to grow and he became the leading Lancastrian claimant to the English crown. He promised his supporters that if he became king he would marry Edward IV’s daughter, Elizabeth of York; a political union that would would hopefully unite the warring houses of York and Lancaster. With the support of exiled Lancastrians and the French monarchy, Henry planned to mount an invasion of England.

In 1485, Henry landed at Milford Haven and marched across Wales to England. The warring branches met in a decisive battle which became known as the Battle of Bosworth Field in Leicestershire. The battle was immortalised by Shakespeare’s “Richard III“, where Richard cries” A horse a horse my kingdom for a horse”. During the battle, Richard III ‘s horse Surrey was killed and, unable to flee or to gather more troops, he falls to Henry the Earl Of Richmond who slays him.

King Henry VII was crowned at the top of Crown Hill, near the village of Stoke Golding, thus beginning one hundred and eighteen years of reign for the Royal House of Tudor. He was also the last king in Engla 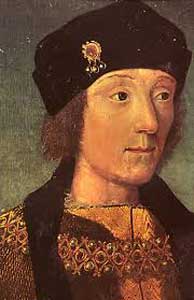 nd to win the throne in battle. (View the Tudor Family Tree for more members).

King Henry VII – Securing the Throne and finances. Having secured parliamentary recognition of his title as King of England he then married Elizabeth of York, his third cousin as promised on the 18th January 1486, thus uniting the House of Lancaster and the House of York . This gave his heirs an even stronger claim to the throne. He adopted the now famous Tudor rose as the emblem of England, combining the white rose of York with the red rose of Lancaster to symbolise an end to the dynastic war.

The throne was in a precarious position as the powerful Yorkists remained a threat to him for years. Having never recognised their defeat in the Wars of the Roses, they did not want a member of the Lancaster family as king of England. Nevertheless, he consolidated his position with a treaty with France that opened up trade between the two nations. The most important treaty was the ‘Intercursus Magnus’ or ‘Great Intercourse‘, signed with the Netherlands, securing England’s textile exports.

King Henry VII  – Building a modern administration. Royal government was reformed with the introduction of the King’s Council that kept the nobility in check. The Royal Council was reborn as the Court of Star Chamber, set up to deal with judicial matters and to control the barons.

The English barons were powerful and rich and had their own private armies. During the Wars of the Roses, they were mercenary, renting out their private armies to the family that paid the most and this threat had to be removed. He banned all private armies and any baron who disobeyed this royal command would be seen to commit treason and risked the threat of the death penalty.

Special councils were also created to secure improved order in Wales and the north  and more powers were entrusted to the justices of the peace. The power of the king was significantly increased by the  combined impact of Henry VII’s reforms. This opened the way for medieval rule, with its outdated local law and customs, to be gradually supplanted by a more centralised and modernised Tudor state.

King Henry VII was fiscally prudent as a monarch. When he took the throne, the exchequer was effectively bankrupt. Edward IV’s treasury had been emptied by his wife’s Woodville relations after his death and before Richard III’s accession.

The English monarchy had never been one of the wealthiest in Europe and even less so after the War of the Roses. But through his monetary strategy and by avoiding war, Henry managed to steadily accumulate wealth during his reign by introducing ruthlessly efficient mechanisms of taxation. Henry was supported by his chancellor, Archbishop John Morton, whose “Morton’s Fork” was a catch-22 method of ensuring that nobles paid increased taxes. By the time he died, he was able to leave a considerable fortune to his son, Henry VIII.

King Henry VII – The New World. Perhaps one of the most important historic steps that Henry took was to give John Cabot, “letters of patent” on the 5th March 1496 to find a Westward route to Japan. However, on the the 24th June 1497, fifty days after leaving the port of Bristol in a vessel called Matthew, he landed on the North East coat of America, claiming the land for the crown. This action was to effectively begin the British Empire and Britain’s long and eventful association with the New World that continues to this day.

King Henry VII – The future Tudors.  Henry and Elizabeth of York had seven children, four of whom survived infancy, Arthur, Margaret, Henry and Mary. Henry secured the marriage between his eldest son, Arthur and the Spanish princess, Catherine of Aragon, in 1501. But in 1502 at just fifteen and only five months into the marriage, Arthur Tudor died suddenly at Ludlow Castle, leaving Catherine a widow and Henry, the new future heir to the throne. It was proposed that Catherine should marry the young Henry, but no agreement could be reached during King Henry VII’s lifetime due to wrangling over Catherine’s dowry.

In 1503 Henry arranged the marriage of his eldest daughter Margaret Tudor to James IV of Scotland in order to secure peace between the two countries. The marriage meant that James IV’s descendants would have a legal claim to the English throne. The Stuarts would realise that in 1603 with James VI of Scotland, when he set the Royal House of Stuart on the throne of England. 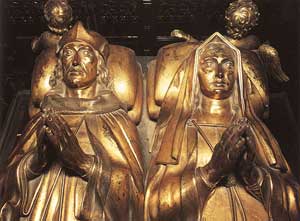 King Henry VII – His death and his legacy. Henry died on the 21st April 1509 of tuberculosis and was buried at Westminster Abbey. He left the throne in a healthy state with a solvent government and a prosperous and reasonably united country. When he died the country was by past comparison, wealthy and the barons had been brought into line.

King Henry VII was undoubtedly successful as the first monarch of the Royal House of Tudor Family Tree. After thirty years of struggle, he had accomplished many goals by the end of his reign Among his achievements was strengthening the judicial system, bringing the countries finances into a state of stability and leaving a secure and wealthy throne for his son and new monarch, King Henry VIII.

If you have enjoyed reading this article about King Henry VII please share, or show your appreciation by clicking on one or more of the buttons above -Thank you