The Royal House of Hanover – The Hanoverian Succession

The Royal House of Hanover was originally a German royal dynasty. However under the terms of the 1701 Act of Settlement, following the death of Queen Anne on the 1st August 1714, the joint crowns of England and Scotland fell to George Ludwig, Elector of Hanover. Despite being only 52nd in line to the throne, he was the late queen’s closest relative and the great grandson of James I.

George I accession to the throne led to a remarkably stable period of Hanoverian rule of Great Britain and later Ireland. A period that lasted one hundred and eighty seven years from 1714 – 1901, by way of only six monarchs. Inpart due to the longevity of the kings with George III reigning for a shade under sixty years.

Strictly speaking the Hanoverian era ended, when William IV died in 1837. Salic Law, which did not permit succession through the female line, prevailed in Hanover. The dukedom was therefore inherited by George III’s fifth son, Ernest Augustus, Duke of Cumberland, but his niece Victoria, succeeded him in Great Britain

The Unpopularity of the House of Hanover in Great Britain was a cause for concern as the Hanoverians were not unanimously welcomed.

George I spoke no English and was less concerned with his duties and role in Britain than that of his interests in Hanover. Despite the fact that the majority of the populace were now Protestant, a minority of Jacobites supported the restoration of the Stuarts to the throne. 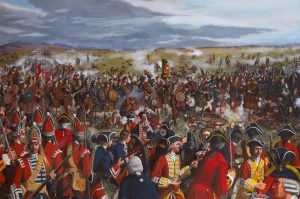 In 1715 a sizeable army raised by the Earl of Mar, launched a rebellion in the name of James VIII. Mar succesfully siezed Inverness and Perth. A second group of Highland supporters and Border Jacobites, marched south into England. On the 13th November 1715 at Preston, Lancashire, they met the English troops, and in a battle lasting two days, the Jacobites were defeated and later minor insurrections were thwarted.

During the reign of George II (who was also German by birth and did not speak English fluently), the number of Jacobite supporters increased which culminated in 1745 when‘Bonnie Prince Charlie’ raised a strong army of rebellion in Scotland. The following year, the notoriously bloody Battle of Culloden Moor famously crushed the Jacobite rebels.

George III, unlike his father and grandfather, was very popular with the people but not with parliamnent. His desire to reverse the diminished role of the monarchy and reclaim the monarchial power lost in the reigns of his predecesors, did not sit well with parliament. His wish to be more assertive was regarded as unconstitutional by the powerful Whig party and they fought successfully against his desires to do so.

Political change during the Hanoverian Dynasty

Prior to the arrival of the Hanovers, Britain was governed under a mixed constitution of the monarch and two houses of parliament.  However the reigns of George I and II saw the powers of the monarchy diminished as the modern system of government by a Cabinet developed. By the end of George III’s reign this had progressed to the point at which actual power was held by the House of Commons and Sir Robert Walpole, who became Britain’s first Prime Minister.

However, the most important change came during William IV’s reign with the Whigs introducing the Reform Act of 1832. This act refashioned the British electoral system, revising existing parliamentary constituencies and extending the franchise moderately, but parliamentary democracy and the secret ballot would come later.

Until then members of the House of Commons and the Lords came from the landed gentry so that wealth and land ownership were the basis of power. The members being Protestant males, were elected in open ballots and were unpaid. Parliament consisted of the two main parties, the Whigs and the Tories. The number of members were bolstered with sometimes over a hundred independent members of parliament who needed to be persuaded on issues and bills.

In 1782, Ireland was granted legislative independance but was dissolved in 1801 with the Act of Union and the creation of the United Kingdom of Great Britain and Ireland. In 1828, the repeal of the Test and Corporation Acts  and the granting of Catholic emancipation in 1829, introduced political rights for both Roman Catholics and Protesant dissenters.

The Empire and the Hanovers

Despite the defeat of the American War of Independance and the disastrous loss of the thirteen colonies from 1776 until 1783. Great Britain continued it’s expansionist plans towards Asia, Africa and the Pacific.

The defeat of France in both the Revolutionary and Napoleanic Wars culminating in Napolean’s defeat at Waterloo in 1815, marked a decisive change in Britain’s dominance as the principal imperial, naval and economic power.

It was also in this period that Britain came to acquire much of her overseas empire, despite the loss of the American colonies, largely through foreign conquest in the various wars of the century.

By the end of the Hanoverian period, the British Empire covered a third of the globe.

Social changes during the reign of the Hanovers

the foundation of the Industrial Revolution

child labour restricted and slavery abolished throughout the British Empire.

If you have enjoyed reading about the Royal House of Hanover Family Tree or considering copying my family tree, please share your appreciation by clicking on one or more of the social buttons above – thank you.