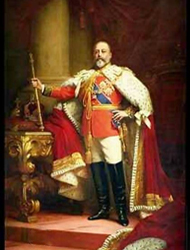 King Edward VII  was born on the 9th November 1841 and was 59 when he became King in 1901 and only reigned for nine years before his death on the 6th May 1910. He gave his name to the Edwardian age but was always known as Bertie.