The Royal House of Orange – The Glorious Revolution 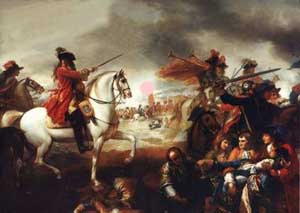 The Royal House of Orange began it’s roots in the Netherlands as a result of the marriage of Hendrik III of Nassau-Breda from Germany and Claudia of Châlon-Orange from French Burgundy in 1515. William III, Prince of Orange, married Mary Stuart on the 4th November 1677. They were both brought up as staunch protestants and Mary was the eldest daughter of King James II. However James later converted to Catholicism in around 1689 when she was nine. It was this decision that seeded the beginnings of discontent that lead to “The Glorious Revolution and the installation of the House of Orange” in 1688.

In 1687 James issued The Declaration of Indulgence and forced it to be read by Anglican clergymen from their churches. The declaration was greatly opposed by Anglicans in England on both religious and constitutional grounds. This concern was compounded when his wife Mary of Modena, gave birth to a son James Francis Edward in June 1688. The son unlike Mary and her younger sister Anne would be raised a Roman Catholic. These events led to seven Englishmen of note, later to be known as the Immortal Seven sending a letter of invitation in late June 1688 to William. The letter asked William to force James by military intervention to make William’s Protestant wife Mary heir to the throne as it was widely believed that James son was an imposter. The letter convinced William to cross the sea with a large invasion fleet in November 1688, landing at Torbay. But after only two minor clashes between the two opposing armies in England, and anti-Catholic riots in several towns, James’s regime collapsed. However the revolution was only secured in Ireland and Scotland by force and with much loss of life. 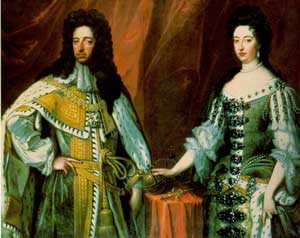 James tried to flee the country but was captured. However he escaped and on his second attempt he successfully reached France where he spent the rest of his life in exile. William’s ousting of James II, ensured that the Protestant faith in Britain was at last firmly entrenched. His decisive victory over James at the battle of the Boyne is still celebrated annually in Northern Ireland, with the Orange Order marches.

The Royal House of Orange was installed when William and Mary were crowned joint Monarchs of England, Scotland and Ireland in 1689, marking an important transition towards parliamentary rule as we know it today.

During the reign of the House of Orange  a number of Acts were put in place which remain in part today. These include the Triennial Act, introduced in December 1694 which ordered that no Parliament should exceed three years and that no dissolution of Parliament should be longer than three years.

Also introduced during the period of the House of Orange was The Civil List in December 1698. The list provided the Crown with funds to pay for its existence in addition to extraordinary expenditure such as wars. As time progressed war became more and more expensive to fund with the Crown having to rely more and more on Parliament for its financial survival.

The Act of Settlement was introduced in June 1701. The Bill of Rights had earlier ensured that Anne would be the rightful heir after William and Mary had passed – along with her heirs. The Act of Settlement clarified what would happen if Anne left no heirs, as was the case. The act stated that the Sophia of Hanover and her heirs would succeed Anne. The Royal House of Hanover was Protestant and the act ensured that the Protestant faith would continue after Anne died.

During their reign Mary ceded most of her authority to William. Though William relied heavily on her whilst he was engaged in military campaigns abroad. She did, however, act successfully alone, proving herself to be a powerful, firm, and effective ruler of the House of Orange.

William also proved himself in the ongoing war with France and was absent from the realm for extended periods during the war with Louis XIV, leaving each spring and returning to England each autumn. In 1689, England joined the League of Augsburg, which later became known as the Grand Alliance. This was a European coalition formed in an attempt to halt Louis XIV’s expansions of France. Peace was heralded on the 20th September 1697 in accordance with the Treaty of Rijswijk, which ended the Nine Years’ War. As a consequence, Louis XIV recognised William III as King of England 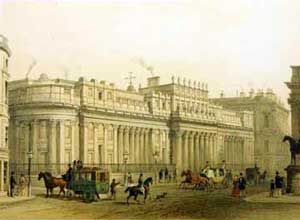 When the House of Orange came to the throne, public finances were weak. The system of money and credit was in disarray and the war with France had exasperated the situation. It was realised that a national bank was needed to mobilise the nation’s resources. William Paterson proposed a loan of £1,200,000 to the Government. In return the subscribers would be incorporated as the Governor and Company of the Bank of England. The money was raised in just a few weeks and on the 27th July 1694 the Royal Charter was sealed.

The Royal House of Orange ended it’s reign after Mary died in 1694 and William’s rule ended with his death in 1702. As William and Mary were childless, Mary’s younger sister Anne, a Stuart, succeeded William bringing the House of Stuart briefly back to the throne before the House of Hanover  was installed in 1714.

If you have enjoyed reading this article about the Royal House of Orange, please share your appreciation by clicking on one or more of the social buttons above – thank you.